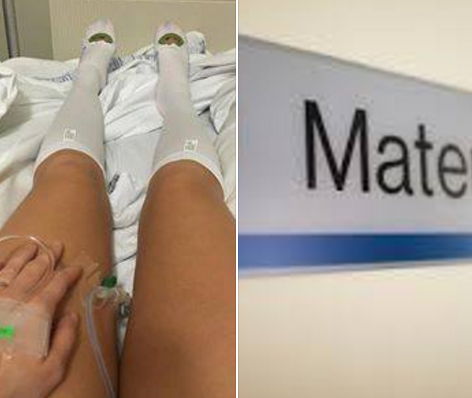 April is a midwife. She wrote her story for us lying in a hospital bed on the ward where she works. Was it possible her pain was as bad as women in labour? Here’s April.

I wanted to share with you my endo story. It’s quite recent, raw & a fair bit overwhelming but I feel so much better for sharing it with women who can relate & understand how much of a bitch endo can be!

I’m 27 yrs old and I’m a midwife. For the past 3 years I have had the strangest menstrual cycle. I started having periods quite late (about 16) and met my husband in school so from a young age I was taking the pill which masked these irregular cycles.

In 2013 -seven years after going on the pill I went to my GP for some other issues and he stopped me taking the pill as he thought it was causing high blood pressure. I was happy to stop it and try other means of contraception as I knew it wasn’t worth the risk high blood pressure.

I decided to just use the old timing schedule (rhythm method) which for the past 3 years has always worked but was probably a coincidence with the endo (I don’t advise you to rely primarily on this method girls)!

Over the next 3 years, slowly, whenever a period would come (every 6-8 weeks) I would be bed ridden. I’d have quite a heavy flow & would often find myself lying on the floor of the shower for three hours yelping with agony. I felt I often resembled women in labour but I would put on a brave face and power through as I thought how could my pain be anywhere close to what a labouring woman is feeling?

I took Panadol/pandeine, voltaren and used numerous hot water bottles in between my showers as I thought my body should not be needing anything stronger (us nurses are very stubborn).

I would often be at births thinking oh gosh I don’t think I can stand up anymore – it feels like someone has a fist up you know where and is pulling out my uterus and ovaries. I carried on somehow but knew something was very wrong.

I asked a gynaecologist I had seen years before for removal of an ovarian cyst who said the pain is probably from adhesions from the surgery. I remember not being entirely satisfied with this response but continued on living.

Last year I got married and my husband and I decided to travel for a few months. We had an incredible time but I found that over 3 months my periods were non-existent but I began feeling discomfort with everyday living. I would daily get the sharp sacral stab, ridiculous bloating & pain on either side of my ovaries like I was about to menstruate.

In December I finally thought that’s it I’m going to have an ultrasound and see how things are. The ultrasound came back showing an endometrioma growing on my left ovary. They told me to come back after a period and see if it resolves itself which it didn’t (just caused the worst period in my history). They recommended seeing a gynaecologist and lucky enough for me I work with some fantastic gynaes and obstetricians who could help. I booked in to see a very well known doctor in my area who I trust 100% for my care.

Over the next 8 weeks whilst waiting for my appointment my pain became a daily struggle. I found I couldn’t even pass urine without being in pain, couldn’t have sex, was unbuckling my belt every moment for some relief and even used ice packs on the outside of my vagina for relief.

When I saw him he pretty much confirmed then and there that I had endometriosis and PCOS. I was relieved there were answers but I had known in the back of mind this was probably the case from my own research. He sent me for a deep pelvic ultrasound (very uncomfortable for someone like me) which is his first line of diagnosis prior to laprascopic surgery. It confirmed several plaques extending from my ovaries down to my vagina which explained the perineal pain.

I was fortunate enough to see my doc the week after in which he booked me in for a laparascopic excision of grade 4 endometriosis. I’m now lying in my hospital bed (on the ward where I work) with a catheter in and four new holes to mark the beginning of my management. Apparently the endo was severe and had travelled through to my bladder & ureters (explains the painful peeing), ovaries were stuck down and there was a lot of endo behind and in front of my also stuck uterus and extending down into my vagina (which looks like was successfully removed)!

My gynae will be starting me on a management plan which he calls “chemotherapy” to help keep the disease from growing and spreading again. He is an advocate for and wants me to start on Visanne. I know unfortunately it’s super expensive but whatever will help suppress the disease I’m happy to fork it out. He will revaluate my response in 6 months (in which case he may insert a mirena and implanon if required).

Although I’ve had a bit of a rough trot I know there are still girls and women out there trying to cope day by day. Please seek help before it gets worse. I’m so fortunate I did otherwise I’m not sure how I would have continued coping everyday.

My husband & Mum have been the greatest support. In the back of our minds my husband and I are worried about fertility but we won’t be ready for kids for a few years. We will deal with that when it comes around but what is meant to be will be. Mum also had endo when she was younger and had very similar symptoms to me. She ended up having 5 children (2 assisted with clomid) which eases my concerns.

And as for my PCOS I’m having bloods taken during my next period and seeing my gynae after to sort out a management plan….1 step at a time!

EndoActive has given me the inspiration to seek help for my pain. Don’t suffer in silence girls, keep searching for answers, they are out there! Lastly, thanks Syl for doing a wonderful job, I know there are a lot of people including myself that are very thankful and grateful for all that you do!