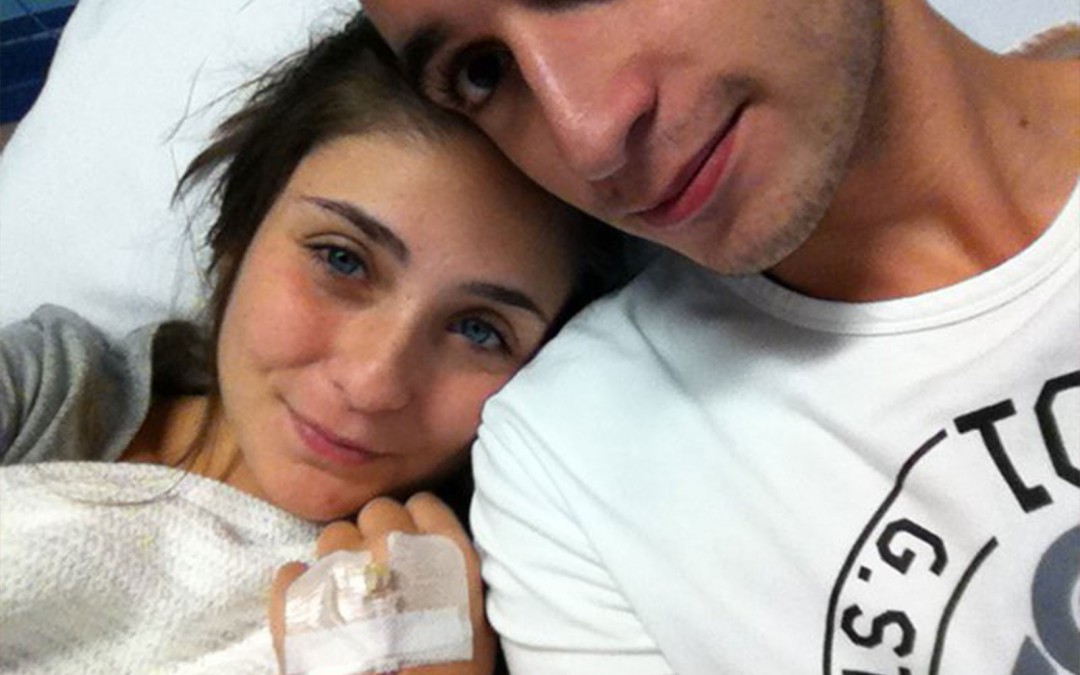 I started my first period at age 10. Being only in year 4 it was extremely petrifying and what made it worse was that it was paired with a whole lot of pain. My mother told me that it was all part of being a woman.

2004 – 2008 were four years of heavy periods, days spent in bed, numerous days of school missed and pain that I couldn’t even begin to explain. Early in 2008 while at home with my sister I was struck down with what could only be described as the worst pain I had ever felt. My insides felt like they were constricted, my back as if it was being stepped on and crushed. I fell to the floor in the fetal position and cried. My parents rushed me to the hospital where I was pumped with morphine and waited 6 hours to see a physician.

When one finally saw me I was still doped up on pain killers, was overlooked and told to go home. Three days later an almost mirror attack happened and I ended up back in emergency. Three hours into my emergency visit and after numerous blood tests, ultra sounds and poking of my abdomen I was placed in a room with a psychiatrist who asked me if the pain I was experiencing was mental and not physical because there was nothing physically wrong with me. “are you possibly doing it to gain attention from your parents?” As a 13 year old this was the most distressing thing. Having this pain I couldn’t describe, that was being brushed off as attention seeking behaviour.

Eight hours into this second emergency visit they came to the conclusion it was my appendix and sent me in for my first laparoscopy to find evidence of that diagnosis and remove it. Waking up post-procedure my mother explained to me that they had found a large amount of blood in my abdomen that was due to a cyst on my ovaries bursting. I was placed on the pill and to everyone else my problem was solved. My pain and heavy periods still continued even though I was on the pill, I still had my off days or even weeks and continued to miss school but I lived with it.

2010 came around and I again had another attack that mirrored the first two, I tried so hard to over-come it, to not complain because of course it was just my PCOS. Almost twenty four hours and a whole lot of pain killers later I was still paralysed from my pain, nauseous and close to passing out. My parents took my back for my third emergency visit.

After almost twelve hours of sitting in a waiting room hunched over in pain (because they were busy and I was not seen as a priority patient) I was taken in, doped up on morphine and asked once again “sweetheart are there any issues at home that may be causing this pain?” I was kept in over night and told to go home and see a gynaecologist. My mother took me to the nearest one. He was an older man who still to this day I despise. When he asked me about my pain on the worst days, I rated it at a 9-10; his response “I highly doubt it’s that bad, it’s just your period and I think it’s most likely a lot less than that.”

My mother and I asked him to perform a laparoscopy to test for endometriosis because my aunty had been diagnosed with it a while back. His response was not comforting and very offensive. He made out that I was just another 16 year old who had normal period pain. Reluctantly he performed the laparoscopy and when it came up with nothing but healthy looking ovaries he told me I was fine and just had to build up a better pain tolerance. Needless to say I never saw him again.

Two more years passed. I continued to curl up in pain every month and cry myself to sleep feeling that this would be my life. When I became sexually active with my current long term partner it was a beyond painful experience to the point where neither of us wanted to continue because it was causing me so much discomfort.

The end of 2013 came around. I was finishing my first year of university and was learning to live with my pain. One night while driving home from dance rehearsals my abdomen began to cramp in a way I can only describe as my ovaries being pulled and twisted; my back felt like someone was constantly digging their knee into it and my entire body went into shock.

I’m still unsure how I drove home that night. My dad carried me to the third level of our house into my sister’s room because I was unable to make it up one more flight of stairs to mine. I was always very secretive about my pain trying my best to not complain, but this was unbearable. I screamed and cried to the point where my parents were afraid and called an ambulance.

I lay in a hospital bed now onto my fourth emergency visit. The doctors told me it had to be my appendix this time and scheduled me urgently to have it removed. Within 2 hours I was counting back from 10 and asleep in an operating room. When I awoke the sweetest nurse I have ever had the pleasure of meeting was beside me. I am so thankful she was there; she reassured me that my mother was on her way and when I asked if it was my appendix she looked so very concerned.

Holding my hand and bending down to my level she explained that even though my appendix was removed it was not the reason I was in pain. The surgeon had found endometriosis covering my uterus and my left ovary; he did his best at burning off what he could.

I remember being still extremely groggy from the anaesthetic, the news causing me to burst out crying. The tears were mixed. A part of me was so sad that endometriosis had now been confirmed and it was something I now was going to live with for the rest of my life and the other part of me was happy. Happy that I finally had a reason behind all this horrible pain I had endured and I could finally find a way to control it.

Nine years after my first period, four emergency room visits, three laparoscopies and one horrible gynaecologist later I had my diagnosis. I currently have an extremely great Gyno – Dr Kim Mathews – supporting me who has aided me in several different pain controlling methods. (She was the one that introduced me to this page). I’m learning to live with the pain which has calmed down since the last surgery and the insertion of the mirena implant.

For the most part I’m doing very well, the pain is still there and I continue to have days where it’s hard to handle. Even though we are only 21 my boyfriend and hope that when the time comes for children we will be okay, knowing that the medical world is forever changing. I now know how hard it is to diagnose endometriosis and I’m grateful that mine has been found. It’s something that still to this day is overlooked in the medical community and it saddens me that so many women are living with this everyday and have no idea what’s wrong with them.