I nearly missed my graduation ceremony because I found a lump in my breast. 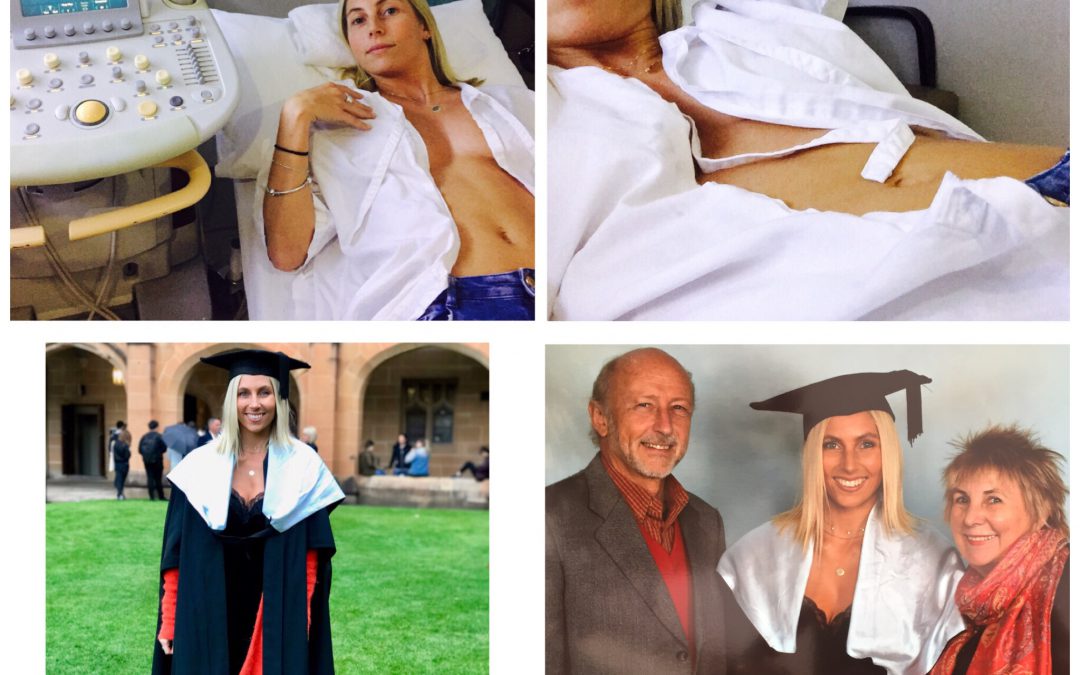 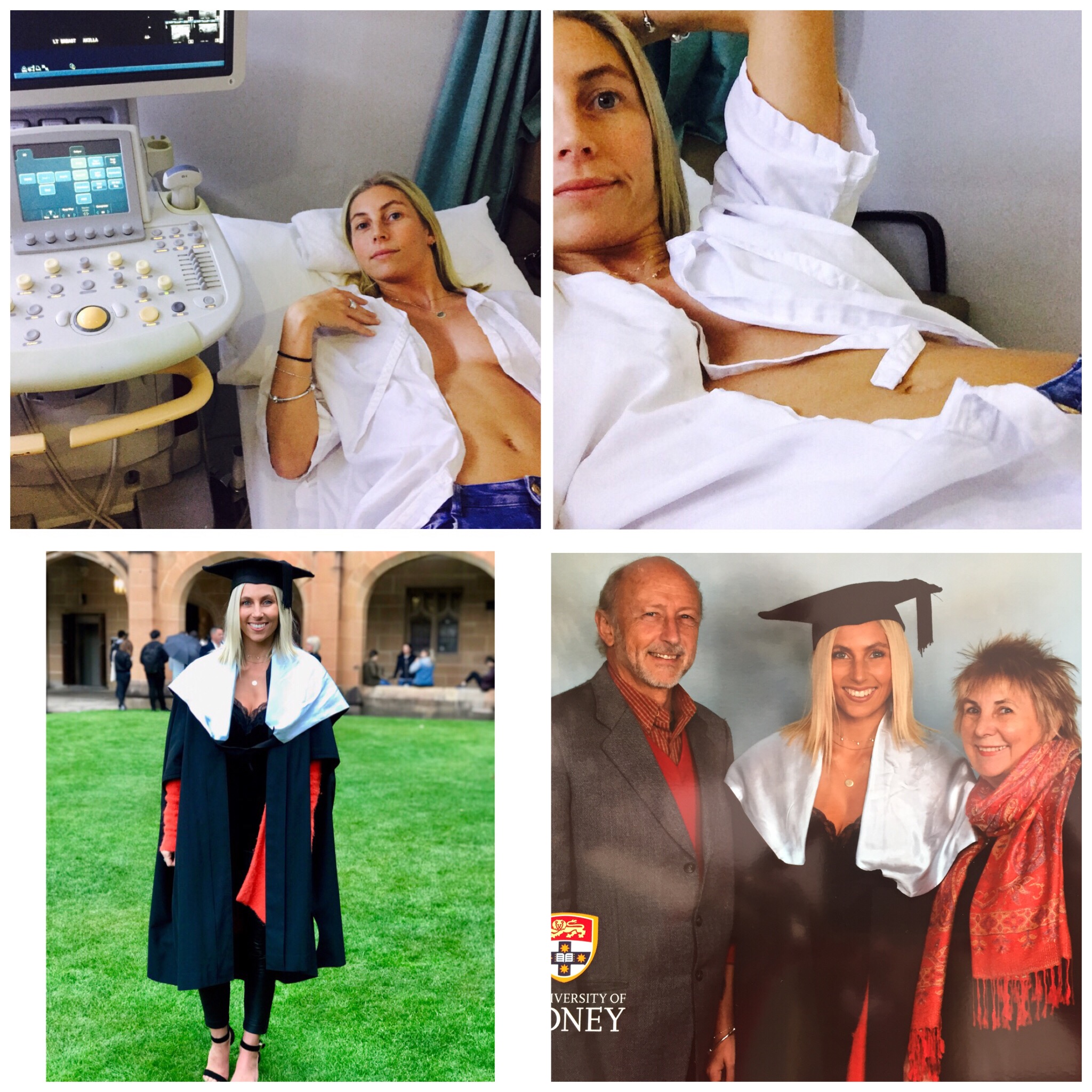 From hospital gown to graduation gown – I didn’t expect to find myself at the Breast Oncology clinic an hour before my ceremony.

Last Thursday night I was standing in the shower thinking about breast cancer – as you do. It occurred to me that breast cancer runs in both sides of my family and yet I’ve never had a mammogram and have no idea how to check my breasts. So, while the hot water ran over my body I decided to give it a go.

Of course I didn’t know what I was doing or what to look for but when I inched my fingertips over to the edge of my breast – close to my rib cage – I yelped. OW!! That really hurt. I checked the other side. YOWZER! Same thing. That’s weird.. I thought.

The next day I went to my GP who ordered me to have blood tests in case I had glandular fever. I had the tests the following morning and was told to wait a few days for the results. In the mean time, my upper side boobs were still really sore and I could feel the pain increasing by the day. On Wednesday morning I got up early to see my doctor and get my test results. Again, while I was in the shower I felt around – wondering if I’d somehow pulled a muscle – or multiple muscles. I lifted my right arm up above my head to feel if I had pain in that part of my body and pressed gently with my left fingers and that is when – to my horror – I found a lump on the edge of my breast, about the size of a 50 cent piece. It had edges and I could hold onto it and move it around.
15 minutes later, I was showing my GP. He was concerned but not overly concerned. He said that pain is probably a good sign that I don’t have cancer but that all my blood test results were great and showed no sign of poor health, infection or glandular fever, so I’d need to see a specialist.
Next thing you know I’m filling in forms at the Breast and Surgical Oncology clinic in North Sydney. The doctor was lovely and also examined me. I guess I thought she’d tell me it’s nothing so I wasn’t prepared for her to say she didn’t know what the lump was and that I needed to have an ultrasound and maybe a biopsy.
By this stage it was nearly 11am and I only had 2 hours to get home, get dressed, put my makeup on, get to uni, collect my gown and mortarboard and rush to the Great Hall for my graduation. Still, the idea of sitting with this mystery lump while clapping my fellow graduates on and off the stage was starting to give me anxiety. I glanced at the sign on the wall of the clinic – “Breast and Surgical Oncology”. I’d googled the clinic in the waiting room. “Excellence in care for breast cancer, melanoma and soft tissue tumors”. What was I doing here?
30 minutes later I was lying down topless in a dark room covered in lube with a lovely young woman while she gave me an ultrasound. It was the 3rd person in 2 hours who had asked me to take off my bra so they could have a feel which was absolutely necessary but even so, I was starting to feel like a pin cushion being pushed and prodded and my boobs were now killing me. I kind of wanted to cry. Not because I was scared. Just because.
But then she told me some wonderful news. She didn’t think there was anything to worry about and said it was most likely swollen glands in the ‘tail’ of the breast’ – a little addition to the breast that most of us don’t know about that wraps around your upper ribs. It contains glands that can swell and become sore – usually caused by a spike in oestrogen.
I was relieved and keen to get going. But just as the sonographer was leaving the room, she turned and said, “You don’t have a history of breast cancer in your family do you?”
“Uh yes” I replied.. “It runs in both sides of my family. My grandmother died of it.”

“I see. Just wait here while I get the doctor.”

Relief gone. More waiting. At this point I got out my phone and started documenting my morning before I got a bad prognosis. It’s really hard to take a nice photo in an ultrasound room FYI. It was now after 12pm. Finally the doctor came in. She became the 4th person to have a feel, lubed me up, felt the lump and gave me another ultrasound. She was also fantastic and had brilliant bedside manner. Thankfully, she expressed that it was probably nothing serious and that it was likely an oestrogen spike causing sore and swollen glands as the sonographer had said.
As I lay on the bed in my hospital gown with Mum by my side, the doctor looked me straight in the eye and told me several times very slowly and firmly, as if to reassure me, that she wasn’t worried. Her delivery was as though I was extremely worried, which I realised (oddly) that I wasn’t.
It was then that a really fucked up thought popped into my head – if it is breast cancer, I’ve probably caught it early and it’s going to be really simple and easy to treat. Doctors understand breast cancer very well and there is a clear treatment protocol and I’ll be absolutely fine and taken care of and it will be nowhere near as traumatic as being told I have endometriosis. The pain of endo is not just physical – the confusion, lack of information and trauma of our pain not being believed my doctors as well as no clear treatment protocol after surgery is dreadful.

To clarify, of course I don’t wish I had breast cancer over endometriosis. Of course not. But that was my honest reaction to this potentially awful situation – that it would be easier and less painful to remove a breast tumor, that I’d have wonderful care, plenty of information and I would be totally fine.

A few seconds later I was kind of horrified that I’d had such clarity of thought to run through this scenario and be completely ok with it – even relieved by it. But I didn’t have too much time to think about it. All of a sudden I was in a different kind of gown, up on stage receiving my Masters degree, then tossing my cap in the air trying unsuccessfully to look cool while getting the quintessential hat-tossy graduate photo. I may still need a biopsy and my tits are still killing me, but when I stood in the Quad at Sydney Uni clinking champagnes with my Mum and Dad, we could finally all exhale.