How to talk to… 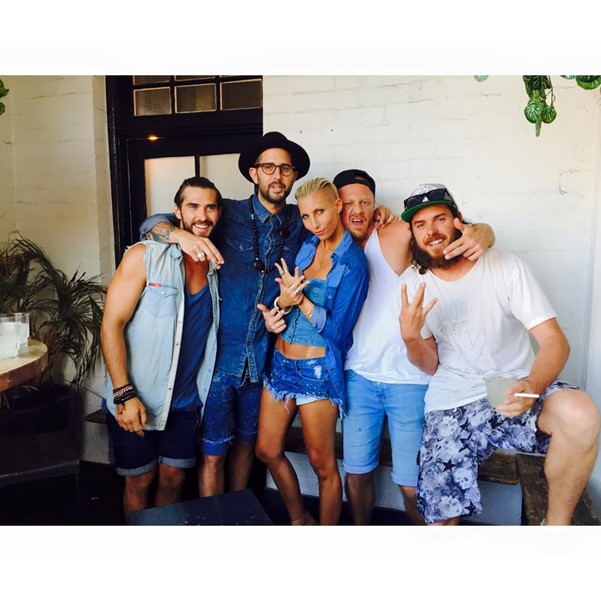 Your section: Talking to people about endo

Intro: Chattin’ with boys about period pain. At the pub.

It was just your average Friday night. After a mental week at EndoActive HQ I ventured out to a pub in Chippendale to have a coupla with me mates. It was there that I wound up talking to a bunch of dudes about periods. Oh yes.

So as I was walking through the pub courtyard, this guy stopped me and said, “Hey aren’t you the girl from that video on the net? It was about En…..do….metriosis?” I was excruciatingly embarrassed.

Oh great, I thought to myself. I’m talking to a complete stranger, who’s a dude, who knows all about my periods. And that my mum threw me a period party. Awesome.

“Yep that’s me!” I said to the guy, doing a terrible job of hiding my embarrassment. He went on to tell me everything he could remember about En…..do….metriosis? I told him we just call it Endo. He was cool with that. Then he told me how proud he felt when he called his girlfriend after he’d watched our video and told her everything he knew about Endo because like, he’s a guy, so that earned him mad props. At this point his six friends had crowded around asking what we were on about.

I’m a little ashamed to say I wasn’t as forthcoming with information as my new mate was. Being out and proud is something I’ve written about before and public discourse about women’s health and issues is something I’ve become passionate about but in this strange moment I was completely caught off guard. It just isn’t the type of conversation you’d ever dream of being dragged into. I suddenly realised that being out and proud feels empowering when you’re calling the shots but quite uncomfortable when you’re not in control and information is being squeezed out of you.

Now another six blokes were about to learn that I have Endometriosis. The expressions on their faces were a mixture of confusion, feeling sorry for me and possibly concern that they might catch it. To rule that out, they quickly got down to business. And my God, the QUESTIONS! Every time I thought I’d satisfied them with an answer, then came another. And another.

Them: So what exactly IS it?

Me: It’s a disease that attacks your reproductive organs. Don’t worry it’s not infectious.

Them: So how do you get rid of it? Is there a cure?

Me: Nope, no cure yet but normally you have keyhole surgery to remove it then do what you can to keep it under control. Diet, meds, exercise, acupuncture…things like that.

Me: It looks like cobwebs all over your organs inside you. They all kind of stick together.

Me: Well it can cause a lot of pain… chronic pain for some girls. It’s awful.

(Notice me dodging talking about bleeding and painful periods here. Pathetic I know but I honestly thought the second I mentioned blood or periods they’d be running for the door quicker than you could say Heineken. I’m yet to meet a man who’s comfortable talking about either.)

Them: So how do you know you have it? Are you like, born with it?

Me: (words failed me at this point but luckily old mate had me covered)

Old Mate: Periods. It starts when you get your period and they’re like really painful. I think my ex-girlfriend had it.

Me: (just absolutely flawed and basically unable to speak. Was this really happening?)

Them: Oh man that sucks. Are you feeling ok right now? Are you like in pain? Do you wanna sit down?

Me: (So cute! I explained that I’m feeling great and don’t need to sit down.)

Them: So wait, does that mean you can’t have kids?

Me: (Oh really??? Are we actually discussing my fertility now? Are we doing this?) Um possibly but loads of women with Endo still have kids. It can be a lot harder for us because of the damage done inside but I try not to think about that. I froze my eggs last year so I’ve got backup!

Them: oh wow that’s so cool! So what’s the video about? Can we see it?

And so on and so on. They wanted to know the whole story. So I re-told it from the beginning. About having painful periods when I was younger. Then getting older, being on the pill and having random terrible pain with no period. About going undiagnosed for a long time.

Then one of the boys said he thought his ex-girlfriend must’ve also had it because she used to be in agony after they had sex. That was really interesting because I never mentioned painful sex as a symptom of Endo. Luckily for me I’ve never experienced that. But many girls do.

I told them about the petition and Visanne and the 74,500 signatures and Bayer saying yes… They were so into the story and more excited than I was about the release of Visanne. I relaxed once I started doing my spiel – something I’ve done a hundred times now. When I got to the end I realised my smile was breaking my face. I was still in shock by what had just happened, still slightly embarrassed but overall ecstatic that I had just had an overwhelmingly positive conversation about Endo and painful periods and girlie business with a bunch of boys at the pub! They were FULL of congratulations about EndoActive and truly, honestly fascinated by the whole thing. They seemed surprised that I was alive and walking around with an incurable disease.

In the end I had to excuse myself. We said our goodbyes, everyone having a good laugh. I literally couldn’t stop smiling as I walked out. As I stood waiting for a cab, one of the guys I was talking to jogged out of the pub towards me, clasped my hands and said “I just want to say I think it’s amazing what you’re doing,” followed by something to the effect of, “I’ve got something of my own I’ve been dealing with so I kind of understand.”

He didn’t give anything else away but from his body language and the way he was speaking, it felt like he was thanking me for talking about my own shit cause it made him feel less burdened or trapped by his own shit. It didn’t matter that he didn’t go into more detail.

I’d never considered that me talking openly about having endo would have any benefit for anyone unless they were somehow connected to endo. But here was an example of a much bigger picture. For this person, it didn’t really matter what disease I had. The fact that I was talking publicly about something totally unsexy that I live with really meant something to him. It made an impact on him. He looked kind of liberated. It was a beautiful moment that took me completely by surprise.

What this conversation achieved was not just the obvious: raising awareness about Endo, normalising ‘girly business’ with boys, talking about EndoActive. In the grander scheme of things, what this interaction achieved was having open dialogue about the things we normally keep hidden. Everyone has something that they don’t want others to know. We become experts at keeping it concealed for fear of judgment, exposure or isolation.

‘Normal’ is illusionary. Seeing everyone’s perfectly framed lives through the rose-coloured, Vaseline lens of Facebook or Instagram is illusionary. We don’t see the warts and stray pubes through filter apps. We’re tricked into believing that a less than perfect, less than photogenic life is not normal, when in reality, having issues is absolutely normal!

So basically let’s keep talking to boys about period pain! Or at least let’s try to put our fears of imperfection aside and begin conversations with each other about whatever. You just never know what might come of it.